The Research area for Molecular & Cell Biology has a wide range of knowledge exchange (KE) activities and various impact cases.

Rice provides a daily subsistence for about three billion people worldwide and its output must keep pace with a growing global population. 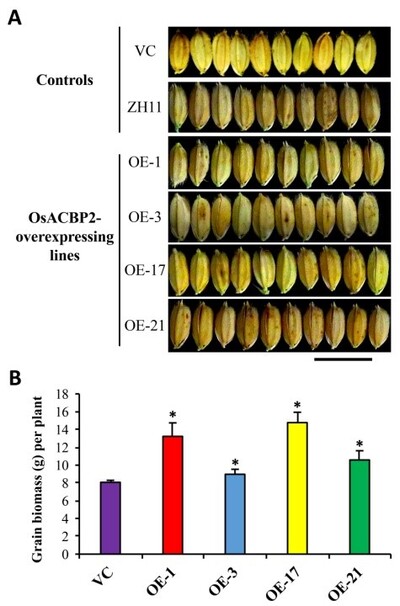 The research project, funded by the Research Grants Council of Hong Kong and the Wilson and Amelia Wong Endowment Fund, has yielded a paper in The Plant Journal and an international patent has been filed (Patent Application No. WO 2019/104509).

OsACBP2 is a lipid-binding protein that binds lipids such as acyl-CoA esters, the major precursors in seed oil production. OsACBP2 overexpression also improved nutritional value with a 10% increase in lipid content of rice bran and whole seeds. As rice bran oil is considered highly valuable because it contains bioactive components that have been reported to lower serum cholesterol and possess anti-oxidation activities, this technology would not only help address food security but also elevate nutritional properties.

They discovered that centromeric DNA is used as a template to produce a non-protein coding, centromeric RNA (cenRNA), that is essential for chromosome stability. If there is too much or too little cenRNA, the centromere will be defective and chromosomes will be lost.

Abnormally high expression of cenRNA was found in some cancers like ovarian cancers. This indicates that mis-regulation of cenRNA in the cell might contribute to cancer progression.

They will try to see if cenRNA could be used as a cancer biomarker. If the cancer cells release a high level of cenRNA to the blood, it could be used for early detection or for monitoring the malignancy of the tumor.

To know more about this discovery, please visit this page.

Age-related macular degeneration (AMD) is one of the most common causes of vision impairment among the elderly in Hong Kong.

In an observational study, wet-form AMD patients in Hong Kong were deficient in fatty fish (omega-3 fatty acid) and dark green vegetables (carotenoids), and had excessive red meat (omega-6 fatty acid) in the diet, which increased the risk of developing AMD.

The poor dietary habits were also associated with the generation of fatty acid oxygenated products via free radicals/ROS, which promoted inflammation and further increased the risk factors for AMD development. It is the first of such research in Asia.

More KE activities and impact cases could be found Here.