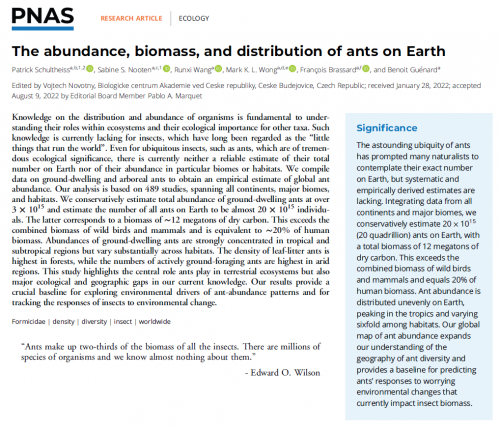 Ants are one of the most successful and dominant groups of organisms. Their high degree of social organisation enables them to colonise nearly all ecosystems and regions around the globe. Over millions of years of co-evolution, they have developed tight interactions with a plethora of organisms ranging from plants, to fungi, to other insects or even larger vertebrates. Some regard ants as foes, others as vital partners or as a food resource. Simply put, ants are everywhere.

But how many are there? What is their total weight? What is their percentage relative to other organisms, including us, humans? What about the distribution of ant abundance around the globe? Is it homogenous, or does it fluctuate between different biomes or habitats, like some regions of the world host more species than others? Ultimately, can we thus observe areas where ant abundance is especially high, with potential implications for other organisms as well?

While these questions may appear trivial at first, they have enormous implications for our understanding of natural processes since ants are such key players in most ecosystems and have numerous and complex interactions with other organisms.

These questions have been addressed by a team from the Insect Biodiversity and Biogeography Laboratory of the School of Biological Sciences (SBS) at The University of Hong Kong (HKU) in a recent publication in the Proceedings of the National Academy of Sciences of the USA (PNAS). The researchers used a novel approach to attempt counting every ant on Earth. While ants may appear insignificant to many of us at first glance, this study shows that their combined number is, in fact, substantial and that further investigation and understanding of their abundance patterns may help in the preservation of ecosystems and species around the globe.

Dr Patrick SCHULTHEISS, a lead author of the new study and then a Postdoctoral Fellow at SBS, explains: “For decades, ant researchers have been incredibly busy studying ant communities the world over. They have collected thousands of ant samples to identify the species and often counted all the ants as well when publishing their results in scientific articles. We were able to compile such data from nearly 500 different studies from all over the world and written in many different languages. In this way, we have been able to quantify the density of ants in various parts of the globe, and also to estimate the total number of ants on Earth.”

Previous estimates, including one from famous biologists Bert Hölldobler and Ed Wilson, had ranged from 1015 to 1016 individuals. These were essentially educated guesses, as a global, representative dataset was unavailable at the time. In this new study, the total number of ants on Earth is estimated to be 2 to 20 times that number. “Our estimate of the global ant population is 20 x 1015 individuals,” says co-lead author Dr Sabine NOOTEN, former Postdoctoral Fellow at SBS. “That’s a 20 with 15 zeroes, which is difficult to appreciate. In terms of biomass, all the ants on Earth weigh more than all the wild birds and mammals combined, or about 20% of human biomass.”

The study also found that ants are unevenly distributed over the global land surface. As a general pattern, tropical regions harbour more ants than non-tropical regions, but this also depends on the local ecosystem.

“Ants are particularly abundant in forests, and surprisingly, in arid regions but become less common in human-made habitats, with potential consequences for the ecological services (e.g. decomposition, pest control) they may provide,” explains Dr Nooten.

The study also highlights major gaps in our understanding of global patterns of biodiversity. Dr Benoit GUÉNARD, head of the Insect Biodiversity and Biogeography Laboratory of HKU SBS and senior author of the study adds: “As global efforts to synthetise hundreds of years of research on insect biodiversity come to fruition, we begin to realise how little we know and how scarce data are for numerous and vast regions of the world. This is very worrisome as the world is changing rapidly, and scientists are lacking baseline information on how biodiversity may be changing in these regions. Societies and governments need to be more proactive about this and make important efforts and investments to fill these gaps. Counting ants is not a difficult exercise, and citizens from all over the world, with the right methodology, could be involved in providing a more profound understanding of the changes that are happening over time and space.”