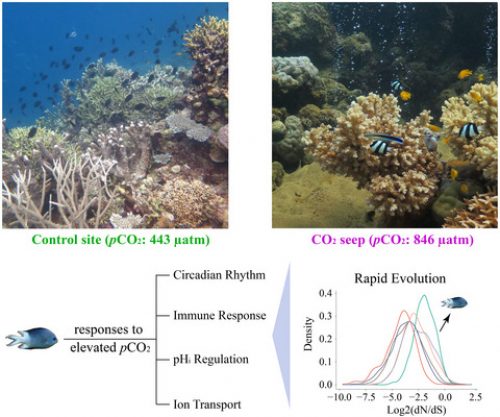 A research team led by Dr Celia SCHUNTER at School of Biological Sciences (area of Ecology and Biodiversity) & The Swire Institute of Marine Science, The University of Hong Kong (HKU), in collaboration with researchers from The University of Adelaide, James Cook University in Australia, IRD Institute in New Caledonia, and Okinawa Institute of Science and Technology Graduate University in Japan, revealed the basis to variability across different fish species and uncovered that some species evolve more rapidly, providing them with evolved molecular toolkits and allowing them able to cope with future ocean acidification. The journal paper was recently published in Global Change Biology.

Global ocean surface pH is projected to decline with the ongoing uptake of anthropogenic atmospheric CO2 by the oceans, a process termed ocean acidification (OA). A decade of laboratory experiments indicate that predicted OA conditions affect some marine fishes’ physiological performance, growth, survival, and crucial behaviours for the survival of the fish.

To test how marine life will respond and whether adaptation to this rapid acidification is possible, researchers went to a remote place on this planet to study in situ exposure to elevated partial pressure of carbon dioxide (pCO2, the amount of carbon dioxide dissolved in water) and be able to predict how in the wild fish can cope with these environmental conditions predicted to exist across the globe by the end of this century. With rapidly changing environments due to human activities, it is crucial to be able to predict what will happen to marine organisms and in particular fish populations to optimise our conservation and management efforts.

The study here indicated some fish species that evolve more rapidly may have a flexible way to cope with OA, which should be helpful for these species to maintain their population size and biodiversity. However, for some other species evolving slowly, OA will be difficult for them once the OA level is beyond their tolerance levels.

Volcanic CO2 seeps can be used as natural laboratories where CO2 rises from the substratum and acidifies the surrounding seawater to levels similar to, or sometimes beyond, the projections for ocean acidification by the end of this century. Six adult coral reef fish species including damselfishes and a cardinalfish species from a reef within the Upa-Upasina CO2 seep in Papua New Guinea (pH 7.77, pCO2 846 µatm) and an adjacent reef (500 m distance) with ambient pCO2 (pH 8.01, pCO2 443 µatm) were sampled, tissues were extracted, analysed and sequenced for their cellular response to elevated CO2 in their brains. The six fish species in this study are common coral reef fish but exhibit slightly different ecologies including differences in parental care and being active during the day or night, and therefore we can, to a certain extent, extrapolate the found patterns also to other fishes.

Common responses to OA across species

Elevated pCO2 induced common molecular responses related to circadian rhythm as well as the immune system several of the species, revealing that these are important processes that are affected by elevated CO2 for many species. Circadian rhythms are the drivers of our 24-h biological clocks and exist in human, other animals and plants. They drive our sleep patterns and also our metabolism, and this shows that the circadian rhythm core genes affect many other downstream functions and can also affect behaviour. The adjustment here of the Circadian genes with elevated CO2 seemed to drive gene expression changes of other genes in the brain, which may allow the fish to flexibly react to the CO2.

Immune regulation appears to further be an important function involved in the response to elevated pCO2. Interestingly, while this was the case across numerous species of reef fish, the nocturnal species exhibited an elevation in immune genes, whereas other species supressed the immune genes with elevated CO2. This is a phenomenon not previously studies and hint to the fact that nocturnal and diurnal species may respond differently and this warrant further study.

The spiny damselfish, A. polyacanthus, can regulate the pH levels within its cells through the gene expression changes to respond the environmental elevated pCO2 at the CO2 seep. We originally thought that an elevation in the pCO2 to end-of-century predictions would not be a large impact to fishes, as they know how to regulate the pH, however we see that these coral fish species induced significant expression changes in many genes, especially A. polyacanthus, hence showing the need to regulate the cells in the brain in response to the CO2 levels in the ocean waters.

For a brain to function properly and signalling to occur in the brain, providing the different neurons with essential information, ions such as calcium, sodium, potassium and chloride need to be transported. Here we found that such transporter genes changed their expression, especially for A. polyacanthus when living in the seeps, which shows that neural signal transductions needs to be altered in response to elevated CO2. Interestingly, during our sample collection at the remote reef a storm arose for 24 hours, which moved a lot of water of the CO2 seep site and increased the pH temporarily. We were able to collect some spiny damselfish during this time and now see that all the cellular changes are reversible as they changed quickly back to the levels of what we see at the control reef with current day CO2 levels. These results indicated A. polyacanthus may be able to switch their gene expression to respond rapidly changing pH levels.

The spiny damselfish species, A. polyacanthus, evolve more rapidly than the other species over the past 15 million years, which leaves this species with an enhanced potential to adapt to changing environmental conditions. In particular, the genes seen to be important in the response to living in elevated pCO2, such as genes involved in intracellular pH regulation, circadian rhythm (can adjust the expression of many other genes), and ion transport (have impact on the neural signal transduction), also indicated an increased evolutionary rate. This can lead to increased gene expression alteration accordingly to environmental change namely transcriptional plasticity — to ocean acidification in A. polyacanthus. As such, this species may possess evolved molecular toolkits to cope with future ocean acidification.

“It has been quite puzzling why some species struggle more than others with ocean acidification conditions. Our expedition to this remote CO2 vent site allowed us to look at many fish species that live naturally in these elevated CO2 conditions and complete parts of the puzzle,” Dr Celia Schunter remarked, “we see that possibly limited by slow evolution, some fish species may not be flexible when responding to elevated CO2 conditions and struggle more.”

“Species that evolve more rapidly may have a flexible way to cope with ocean acidification, which should be helpful for these species to maintain their population size and biodiversity. However, for some other species evolving more slowly, ocean acidification will be difficult for them once the pH level beyond their abilities to maintain their acid-base balance. Previously we did not understand why some species struggled and others didn’t as much and understanding why some may be ‘winners’ or ‘losers’ is important so we can protect especially the ones that will not be able to cope and to keep the balance in the ecosystem,” added Dr Schunter.

This study uncovered that some wild fish species may be equipped with inherent molecular tools via rapid evolution to cope with elevated pCO2 predicted to occur by the end of this century. The next goal for the research team is to validate if other ecosystems exhibit the same findings. Meanwhile, ocean acidification still is a threat for the fish species evolving slowly once the level of ocean acidification rises beyond their regulation ability. As such, slowing the decreasing global pH is key to maintaining high biodiversity of fish.