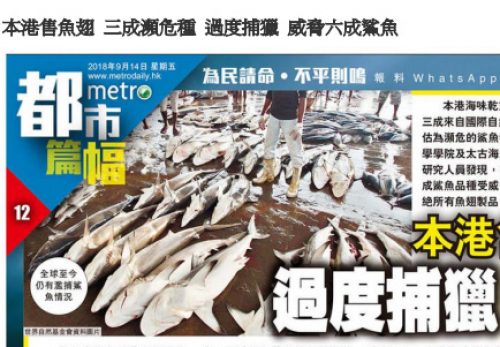 Out of control means off the menu

Fishing pressure on threatened shark populations has increased dramatically in recent years and it is urgent that consumers reject shark fin products altogether – a study in Marine Policy by researchers from the Swire Institute of Marine Science (SWIMS), School of Biological Sciences, University of Hong Kong (HKU), the Sea Around Us initiative at the University of British Columbia (UBC) and WildAid Hong Kong reveals.

“Data suggest that global shark catches now exceed one million tonnes per year, more than double what they were six decades ago. This overexploitation now threatens almost 60% of shark species, the highest proportion among all vertebrate groups.” said HKU School of Biological Sciences Professor Yvonne Sadovy, lead author of the study.

* The paper “Out of Control Means Off the Menu: The Case for Ceasing Consumption of Luxury Products from Highly Vulnerable Species when International Trade Cannot be Adequately Controlled; Shark Fin as a Case Study” was recently published in Marine Policy.