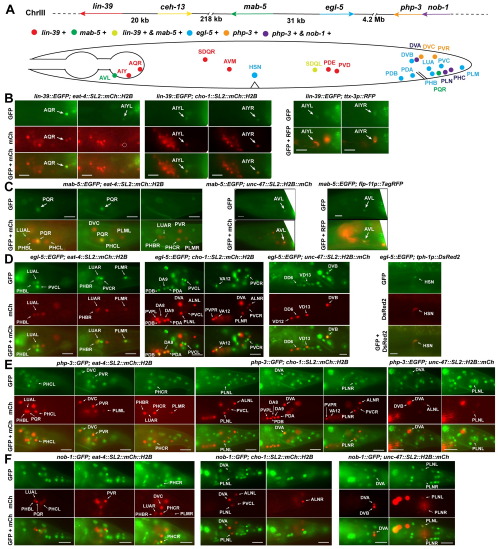 Hox genes encode evolutionarily conserved transcription factors that specify regional identities along the anterior-posterior (A-P) axis. Although some Hox genes are known to regulate the differentiation of certain neurons, to what extent Hox genes are involved in the terminal specification of the entire nervous system is unclear. They systematically mapped the expression of all six Hox genes in C. elegans nervous system and found Hox expression in 97 (32%) of the 302 neurons in adult hermaphrodites. The results are generally consistent with previous high-throughput expression mapping and single-cell transcriptomic studies. Detailed analysis of the fate markers for these neurons revealed that Hox genes regulate the differentiation of 29 (25%) of the 118 classes of C. elegans neurons. Hox genes not only regulate the specification of terminal neuronal fates through multiple mechanisms but also control subtype diversification along the A-P axis. The widespread involvement of Hox genes in neuronal differentiation indicates their roles in establishing complex nervous systems.

Link of journal paper can be accessed from here: https://journals.plos.org/plosgenetics/article?id=10.1371/journal.pgen.1010092