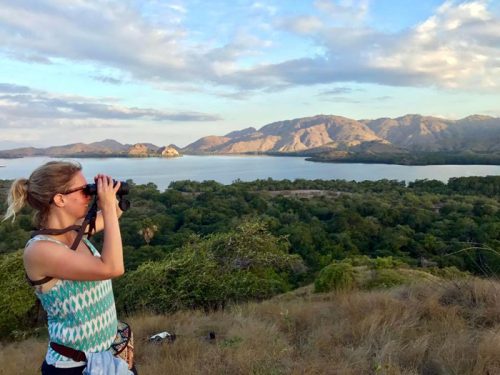 PhD Student and recently named National Geographic Young Explorer Astrid Anderssons’ research focuses on wildlife trade and conservation of the Critically Endangered Yellow-crested Cockatoo (Cacatua sulphurea). This species, like many others, has been decimated by overexploitation for wildlife trade – with over 96,000 extracted from its native Indonesia, and traded internationally as pets in the 80s and early 90s. Now, just 2,000 remain in the wild globally – and around 10% of those in an introduced population here in Hong Kong. Astrid will study and compare behaviours, inter-specific interactions and time budget allocation of the population in Hong Kong with the largest remaining native population in Komodo National Park. She will also conduct semi-structured interviews on rangers and villagers that have lived and worked in the park long-term, to give context to population fluctuations documented in Komodo over the past few decades, and figure out major threats that persist to these Yellow-crested Cockatoos. Likewise, in Hong Kong, regular population counts, bird market surveys and stable isotope analysis is helping her gage how current the threat of poaching is to the ex-situ population here. This research is partly funded by a National Geographic grant Astrid wrote with her supervisor Dr. Caroline Dingle. It is also supported by Ocean Park Conservation Fund. Astrid is excited to be a National Geographic Young Explorer, and looks forward to reporting her experiences and findings – and contribute to conservation of this Critically Endangered species going forward.