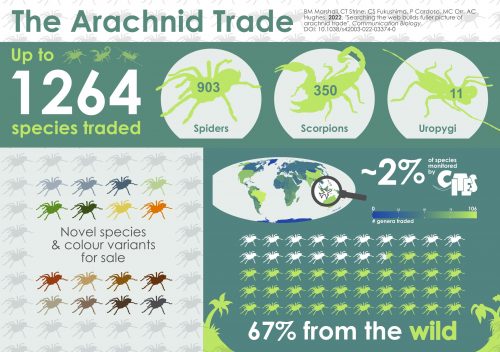 Spiders, tarantulas and scorpions may be creepy to many, but it turns out there’s a gargantuan market for arachnids as pets, and it is mostly unregulated — posing problems for the sustainability of their species.

Dr. Alice Hughes and her colleagues shine a light on the largely unregulated trade of creatures that prefer to lurk in the dark. More than 1,200 species of arachnids, including spiders and scorpions, have been or are currently being traded around the world, according to the findings of a study published in Nature on 19 May 2022. About 79% of the creatures are listed on arachnid-selling websites but not included in trade databases, according to the research.

The findings highlight that millions of spiders, scorpions and their relatives are being bought and sold, and there is a pressing need to monitor trade to prevent biodiversity losses, the researchers wrote. Hughes urged pet owners to be conscientious when deciding whether to buy one of these creatures.