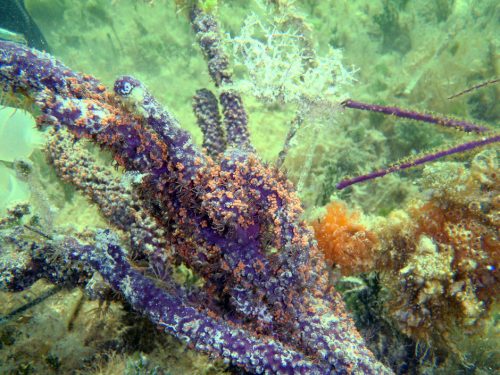 Using stable isotope techniques, the research team was able to unravel the flow of nutrients between different species of algae in their host, a Caribbean coral species. Photo credit: M.A. Coffroth

In human society, reward and punishment are introduced as an incentive to induce cooperation. However, some people still try to cheat to win. So, is there a system with clear rewards and punishments in the world of other organisms? The answer is ‘yes’.

Corals may ‘punish’ the algae that live inside them by cutting off their food supply if such algae become selfish and renege on their part of the resource-sharing deal with the coral as part of their symbiosis – a mutually beneficial relationship. These are the findings of Dr Shelby MCILROY of the Swire Institute of Marine Science (SWIMS) and the School of Biological Sciences at The University of Hong Kong(HKU) and her collaborators..

In the coral-algae relationship, the two sides – the coral host, and the algal symbiont, share and recycle nutrients they cannot access on their own. But this relationship is open to abuse. Corals can host several species of symbiotic algae at the same time, but not all algal species are honest. Some take advantage of their host by keeping more nutrients for their own needs instead of passing them to the coral. In this way, the selfish algae gain an advantage over more beneficial species that grow slower because they share their nutrients more generously. This cheating ultimately undermines the long-term health and growth of the coral itself.

In other symbiotic relationships, for example, between trees and fungi, the cheated hosts can interfere and punish their dishonest partners. However, until McIlroy’s latest research came out in the journal Microbiome, it has been difficult to determine if or how corals could do the same with their algae.

Using stable isotope techniques, McIlroy was able to unravel the flow of nutrients between different species of algae in their host, a Caribbean coral species. ‘Stable isotopes combined with genetic techniques allow us to track the currency exchange between the partners. In this case, the currency is nutrients, in the form of carbon and nitrogen,’ McIlory explained.

The results showed that the coral might indeed punish the cheats and reward the honest partners. ‘Our study showed that corals seem to limit the supply of nutrients to the symbiotic algae that are less beneficial to them, as a way of fostering more beneficial algal symbionts,’ McIlroy added.

Understanding how corals control and manipulate their symbiotic algae is now crucially important for coral survival. Because of climate change, the seas are becoming too hot for the algae living inside the coral. When water temperatures spike, algae die, and so does the coral itself – a phenomenon known as bleaching. Episodes of bleaching are now becoming increasingly common, and most of the world’s coral reefs are now threatened by it.

If scientists could get the coral to host the species of algae that can handle higher temperatures – a form of ‘coral probiotics’,  it could prevent bleaching and buy more time for corals threatened by the warming of the oceans.

‘We may have the ability to intervene and help corals resist bleaching by exposing them to more thermally tolerant partners. But we need to understand the biology of corals and how they might react to these interventions so that we can work effectively and efficiently. There’s no time to lose.’ McIlroy concluded.

The journal can be accessed here.