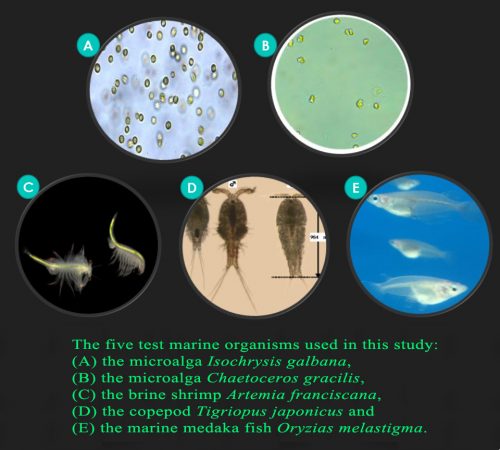 Application of larvicidal oil (LO) to stagnant waters is the most common practice in Hong Kong to prevent mosquito-borne diseases and protect human health. The Hong Kong SAR Government regularly applies LO to tree holes, ponds, marshy areas and construction sites as a mosquito control measure. However, the oil will eventually make its way into the coastal marine environment due to rainfall and surface runoff.

In 2016, former Legislative Council member Mr. Yung-Kan Wong, who represented the agriculture and fisheries sector, invited a team from the School of Biological Sciences and the Swire Institute of Marine Science of the University of Hong Kong (HKU) to investigate fish kills and occasional instances of oil pollution in Shing Mun River and Tolo Harbour, which he had noticed for years and suspected a possible cause was the large quantity of LO being discharged to the sea. In that year alone, local consumption of LO was high at 131,461 litres, according to Food and Environmental Hygiene Department (FEHD) figures.

Under the supervision of Professor Kenneth Leung Mei Yee, PhD student Miss Katie Yeung Wan Yee collected water samples at 15 coastal sites from east to west over Hong Kong waters during the summer of 2016 and 2017 to analyse the content of LO. The toxicity of LO was tested with five different marine species which are widely used as model species for laboratory toxicity tests.

For details, please refer to the following links:
https://www.scifac.hku.hk/press/release/press-release-larvicidal-oil