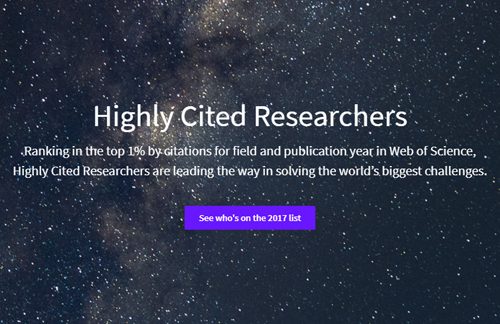 HKU has 12 professoriate staff (see table below) named in Clarivate Analytics’ recent publication last week of ESI highly cited scientific researchers in 2017. Professor Shah from School of Biological Sciences is being honoured as one of them.

According to the information published in Clarivate Analytics’ web site (https://clarivate.com/hcr/), “… the 2017 final new list contains about 3,400 Highly Cited Researchers in 21 fields of the sciences and social sciences. The 2017 list focuses on contemporary research achievement: only Highly Cited Papers in science and social sciences journals indexed in the Web of Science Core Collection during the 11-year period 2005-2015 were surveyed. Highly Cited Papers are defined as those that rank in the top 1% by citations for field and publication year in the Web of Science. This data derives from Essential Science Indicators (ESI). The fields are also those employed in ESI – 21 broad fields defined by sets of journals and exceptionally, in the case of multidisciplinary journals such as Nature and Science, by a paper-by-paper assignment to a field.”  Clarivate Analytics acquired Thomson Reuters’ whose ESI highly cited scientific researchers first appeared in 2001 but was discontinued until 2014. HKU’s highly cited scientific researchers has been on the increase from 5 in 2014, to 9 in 2015 and further to 12 this year.  Details on the methodology can be found athttps://clarivate.com/hcr/methodology/