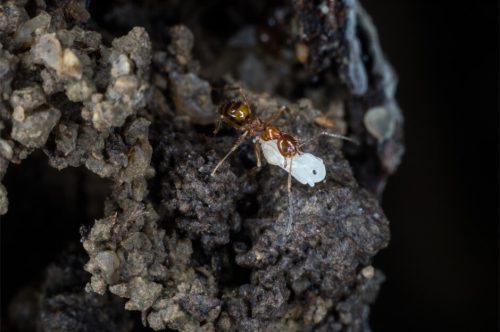 The understanding of long-term responses of the fauna and flora in a world highly modified by deforestation, biological invasions or climate changes is paramount to develop the best conservation strategies. In tropical and subtropical regions, old datasets and specimens are scarce, limiting the monitoring of sites over time and thus informing the best strategies for the protection of biodiversity.

A team of scientists from the Insect Biodiversity and Biogeography Laboratory of the Research Division from Ecology and Biodiversity and the School of Biological Sciences at The University of Hong Kong (HKU), along with colleagues in the UK and the USA, has studied long-term changes in species richness and composition of ants across different habitats in Hong Kong. Their results reveal the importance of forest regeneration in mitigating the increasing effects of extreme hot events for species survival, while temperature-mediated species turnover has been found for species living within open habitats.

Digging up treasure from old datasets

In this new study, the authors studied the species richness and composition of ants at 47 sites in country parks across a >20 years’ period of forest regeneration. The ants were first collected in the mid-1990 by Dr John FELLOWES, an Honorary Assistant Professor of HKU Kadoorie Institute, nearly 20 years ago, who cleverly kept the specimens in a collection here in Hong Kong. Twenty-five years later, the research team used a similar sampling protocol for collecting ants at the sites defined by Dr Fellowes, and re-examined the specimens collected in the 90’s to confirm species identifications.

The results then highlight the importance of secondary forests in buffering temperature impacts on subtropical ants, while in open habitats, such as grassland and shrubland, high temperatures became more important over time in explaining which ant species would be present at a particular site.  Overall, average body size of species in open habitats and in forests with low canopy cover became smaller over time, suggesting that large-body ant species were more susceptible to increased temperature. This then could have consequences on the functioning of ecosystems as large ant species may contribute disproportionally to particular ecological functions, such as decomposition processes.

“Over the past decades, extreme hot days (>33oC) have been experienced more often and for longer period of time. Unfortunately, this may also impact local wildlife, threatening the survival of many species, especially for groups like insects unable to directly regulate their body temperature. Our research investigated how we could mitigate such adverse impacts.” Dr Benoit GUÉNARD, Head of the Insect Biodiversity and Biogeography Laboratory mentioned.

He further adds: “Ants are particularly interesting to understand how habitat modifications and changes in climate may impact local biodiversity. Because of their social organisation, they invest important efforts and energy in building nests, making them almost sessile like plants, and thus enduring the local conditions, contrary to many other solitary organisms which can move more easily between different habitat patches. Thanks to standardised sampling methods and specimens’ collection, we can thus monitor how their diversity and species composition evolve over time as environmental conditions change at a particular site”.

The deforested landscape is now commonly seen in tropical Asia, where forest logging rates are among the highest in the world. The combination of deforestation and climate change have raised the temperatures to some abnormally high levels, so mitigating the increasing heat on biodiversity is urgently required. Here, the new results reinforce the importance of maintaining or increasing forest coverage and age, as the canopy that develops in older forests increases the benefits of its temperature buffering role for species living underneath. Hong Kong country parks provide a unique opportunity to safeguard natural forests and allow them to regrow, but also a rare chance to examine this process on animal communities. The finding of this study highlight the vital role of mature forests in mitigating the extreme heat as well as establishing protected areas that provide time for forests to regenerate.

Two journal papers can be accessed from here and here