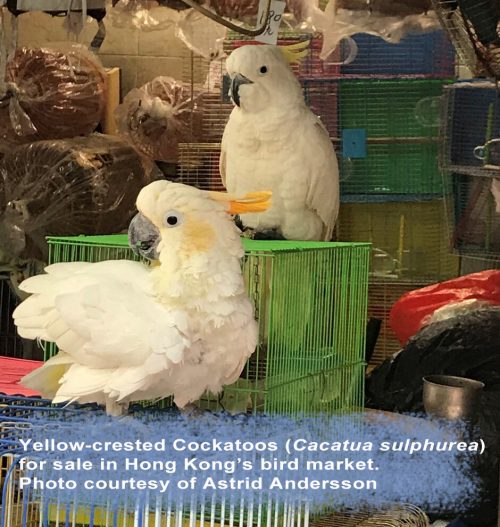 Ecologists from the Conservation Forensics Laboratory of the Research Division for Ecology and Biodiversity at The University of Hong Kong (HKU) have applied stable isotope techniques to determine whether birds in the pet trade are captive or wild-caught, a key piece of evidence required in many cases to determine whether a trade is legal or not. They have applied this technique to the yellow-crested cockatoo (Cacatua sulphurea, YCC), a critically endangered species from Indonesia/Timor-Leste with a global population of fewer than 2,500, according to the International Union for the Conservation of Nature (IUCN). Threatened by overexploitation for the pet trade, Hong Kong has a sizeable population of 150-200 individuals which was established through the release of birds transported here as pets.

There is a global ban on trapping and international trade of wild-caught YCCs; the species has been listed on Appendix I of the Convention on International Trade in Endangered Species of Wild Fauna and Flora (CITES) since 2005. In Hong Kong, it is legal in some cases to sell captive-bred birds, however it is difficult to differentiate a wild-caught from a captive-bred cockatoo just by eye – which means illegally caught YCCs can be laundered in the legal market by claiming they have been bred in captivity.

Yellow-crested cockatoos are commonly sold as pets in Hong Kong. Dr Astrid ANDERSSON from the Conservation Forensics Laboratory conducted a market survey at Yuen Po Street bird market in Mong Kok from 2017-2018 and observed 33 unique individual YCCs for sale during this period, more than have officially been imported to Hong Kong since 2005 (10 individuals). These birds could have been bred by home breeders (which is a legal grey area in Hong Kong), trafficked from abroad (illegal) or taken from Hong Kong’s free-flying, introduced population of YCCs (illegal). In order to determine whether birds in trade are legal or not, there is a need for a method for determining whether an individual is sourced from the wild or captive-bred.

Under the supervision of Dr Caroline DINGLE, Director of Conservation Forensics Laboratory, Dr ANDERSSON conducted stable isotope analysis(SIA) and compound-specific stable isotope analysis(CSIA) on feathers from Hong Kong’s wild YCC population and on feathers from pet cockatoos owned by private individuals to see if differences in the diet of captive and wild birds were reflected in carbon and nitrogen values. The team applied two novel forensic tools: stable isotope analysis (SIA) as the basic first step and compound-specific stable isotope (CSIA), which analyzes isotope values associated with specific amino acids, as the advanced second step. They found that both stable carbon and nitrogen isotope values differed significantly between wild and captive cockatoos, indicating consumption of different plant and protein types in their diets. They also found that the isotopes associated with six amino acids differed significantly – with valine being the most informative.

Enforcement officials could apply this test in the future to determine whether a cockatoo has been raised in the wild or in captivity.

“Legal wildlife trade creates opportunities for the sale of illegally procured wildlife since it is difficult to discern legal from laundered items. This problem is common across many wildlife trade areas – exotic pets, ornaments, seafood – and involves a variety of taxa. Our results show that SIA, together with CSIA, presents a powerful tool for government authorities in their efforts to regulate wildlife trade,” says Astrid Andersson, the first author of the study.

“The successful and novel application of CSIA as a secondary validation step to increase the accuracy of SIA for detecting wild vs captive individuals is promising and adds to the growing volume of research that demonstrates the applicability of stable isotope techniques in wildlife forensics. While more work needs to be done to validate SIA as a robust forensic test, the results from this study show that this is a promising avenue for continued research,” adds Dr Caroline Dingle.