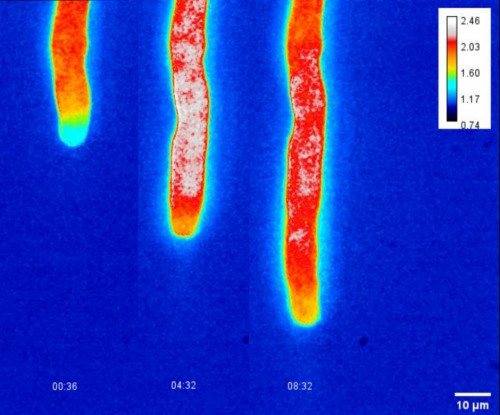 Sexual reproduction of plants requires pollen to land on the stigma, which then germinates and grows pollen tubes through the style to deliver sperm cells to the ovule. Pollen tubes are the fastest-growing plant cells known. Studies have shown that the growth rate of maize pollen tubes can reach up to 2.8 microns per second, while the growth rate of lily pollen tubes can also reach 0.2 to 0.3 microns per second. Its polarised growth process consumes a tremendous amount of energy, which involves coordinated energy fluxes between plastids, the cytosol, and mitochondria. Such an astonishing growth rate requires efficient and tremendous energy for metabolism and continuous synthesis of the plasma membrane and cell wall – the question is: where does the energy come from?

A research team led by Dr Boon Leong LIM of the School of Biological Sciences at The University of Hong Kong (HKU) developed practical biosensors to measure real-time dynamic changes of energy currency in living plant cells and organelles, which reveals how Arabidopsis pollen tubes gain energy to sustain their rapid growth. 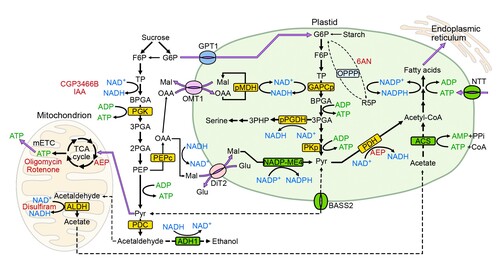 Unlike leaf cells, pollen tubes do not perform photosynthesis and mainly rely on sugar supply from the style to generate energy molecules such as Adenosine triphosphate (ATP), nicotinamide-adenine dinucleotide phosphate (NADPH), and nicotinamide adenine dinucleotide (NADH) to support pollen tube growth. Fatty acids (FA), the building blocks of the plasma membrane of the pollen tube, are synthesised in the pollen plastid, a precursor organelle of the chloroplast that does not contain chlorophyll. The synthesis of FA in pollen plastid consumes a large amount of ATP, NADPH, NADH, and acetyl coenzyme A(acetyl-CoA), an important metabolic intermediate. There are multiple possible routes of supplying ATP, NADPH, NADH, and acetyl-CoA for FA synthesis, but the exact mechanisms are obscure due to the small size of pollen tubes and the lack of tools to measure the concentrations of ATP, NADPH, and NADH in pollen plastids and the cytosol.

By treating germinating pollen tubes with specific drugs, mitochondrial respiration was shown to be the main source of cytosolic ATP in Arabidopsis pollen tubes. Plastid ATP is mainly supplied by plastid glycolysis as well as importation from the cytosol through the nucleotide transporter (NTT) on the plastid membrane.

As for the supply of plastid NADPH, the plastid malic enzyme NADP-ME4 is a more important pathway than the oxidative pentose phosphate pathway (OPPP).

Although anaerobic respiration and pyruvate dehydrogenase (PDH) bypass are considered vital for supplying acetyl-CoA for plastid FA synthesis in tobacco pollen tubes, these pathways are not important in Arabidopsis pollen tube growth. Instead, plastid glycolysis is a more important source of acetyl-CoA for fatty acid synthesis.

The conversion of NADH and NAD+ in plastids appears to be much more complex. While plastid glycolysis and plastid PDH pathway generate a substantial amount of NADH for FA synthesis, surplus NADH has to be converted back to NAD+ in pollen plastid by NAD-malate dehydrogenase (plNAD-MDH) to sustain plastid glycolysis.

This research not only developed more practical biosensors to measure real-time dynamic changes of ATP, NADPH, NADH/NAD+ in living plant cells and organelles, but also reveals the exact biochemical routes of supplying ATP, NADPH, NADH, and acetyl-CoA for FA synthesis in pollen plastids.

Ms Jinhong LIU, the first author of the article and a PhD student of Lim’s group remarked, ‘The in planta fluorescence protein sensors we developed are powerful tools for solving some key questions in plant bioenergetics. We are happy to publish two manuscripts in Nature Communications in 2022 (Note 1) on our discoveries using this novel technology’.

The journal paper can be accessed here.