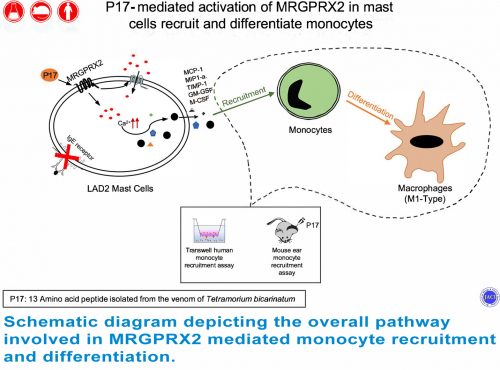 Ants are omnipresent, and we often get blisters after an ant bite. But do you know the molecular mechanism behind it? A research team led by Professor Billy K C CHOW from the Research Division for Molecular and Cell Biology, Faculty of Science, the University of Hong Kong (HKU), in collaboration with Dr Jerome LEPRINCE from The Institut national de la santé et de la recherche médicale (INSERM) and Professor Michel TREILHOU from the Institut National Universitaire Champollion in France, have identified and demonstrated a novel small peptide isolated from the ant venom can initiate an immune pathway via a pseudo-allergic receptor MRGPRX2. The study has recently been published in a top journal in Allergy – The Journal of Allergy and Clinical Immunology.

Allergy is a common undesirable immune response for most people, and are often caused by allergens such as food, pollen, drugs, mites, bites and stings from venomous insects etc. When an allergic reaction happens, mast cells that line the body surfaces alert the immune system by releasing cytokines. Thus, other immune cells are recruited to the infected area to clear the allergens.

Insect venoms are biochemical arsenals developed by animals to defend themselves. Interestingly, arthropods contain the maximum number of species capable of making venoms that can produce biological effects in our body. Particularly, ants are the most dominant and diversified species with more than 14,700 known species and the biggest biomass in most territorial ecosystems. Therefore, Insect venoms are very important resources for us containing a treasure of biologically active chemicals, peptides and proteins. For instance, Purotoxin-1 (PT1), Apamin and Bicarinalin are bioactive peptides isolated from various insect venoms that are known to play a role in inflammatory pain, antimicrobial effects and cytotoxic effects against cancer cells.

P17 is a short host defence peptide isolated from the venom of an ant Tetramorium bicarinatum. We have recently demonstrated its involvement in our body defence system via interacting with an unknown receptor to activate the immune system to kill the fungal infection in mice lungs. P17, therefore can be exploited as a therapeutic peptide for inflammatory disorders or cancer and pseudo allergic reactions. In this study, after screening almost the entire human G protein-coupled receptor repertoire, we have successfully identified a specific human receptor or Mas-related G protein–coupled receptor-X2 (MRGPRX2) that is responsible for interacting with P17 to carry out its activity.

The research team has extensively worked on identifying a lock (GPCR) for a key (P17) by trying about 400 locks for a single key and eventually identified the GPCR for P17. In addition, we also demonstrated the molecular pathways of P17-MRGPRX2 mediated activation of mast cells, an immune cell that is responsible for the allergic reaction. Upon deorphanising of P17, we then used computational approaches to find the important amino acids (ridges in the key) that are important for the binding of the venom peptide with its receptor – like a key ridge in the key for a lock.

Our team then uncovered a novel pathway for this receptor. We showed P17 induces infiltration of monocytes at the injected site by activating MRGPRX2. The effect is quite similar to an ant bite in humans. Once the ant bites you, you will have blisters/swelling, which indicates the immune cell infiltration at the bite site to remove the ant venom. Usually, our body detects the external substances (arrows in the diagram) via receptors (targets) and act upon those external substances to clear them out. In this scenario, P17 is the arrow detected by MRGPRX2 of mast cells to recruit monocytes and differentiates them into macrophages to engulf and clear the pathogens. To the best of our knowledge, we demonstrated for the first time that MRGPRX2 mediated activation of mast cell could recruit human monocyte and differentiate them into macrophages. This study shows a novel immunomodulatory effect of MRGPRX2 and suggests that it is a vital receptor in innate immunity.

Societal impact of the findings

Firstly, a novel immunomodulatory pathway of MRGPRX2 has been demonstrated, which could enhance the overall understanding of the receptor function among the scientific community. Additionally, Macrophages are specialised cells involved in the detection, phagocytosis and destruction of bacteria and other harmful organisms. Thus, using this novel information, we can design new analogues that are agonists or antagonists of MRGPRX2 to modify our immune response to deal with host defence, allergic or other immune diseases.

“We demonstrated that peptides isolated from venoms can be used to modulate immune responses and these peptides are abundant in nature. One key message we should take from this finding is biodiversity is one of the greatest treasure we have and we just have to use them wisely,” says Professor Chow.

“Our findings are evident that novel scientific innovations come from observing the nature. Ant bite leads to immune cell infiltration, so we just isolated the peptide that recruits the immune cells that can be beneficial,” says Dr Duraisamy.

Besides, the HKU team’s laboratory has established a platform for translating basic biology into novel drug discoveries as we already have filed a patent for the design and synthesis of a group of drugs with high efficacies to translate them into societal impact. Using this novel pathway we could eventually tweak it a bit to our benefit to kill off pathogens during infection.