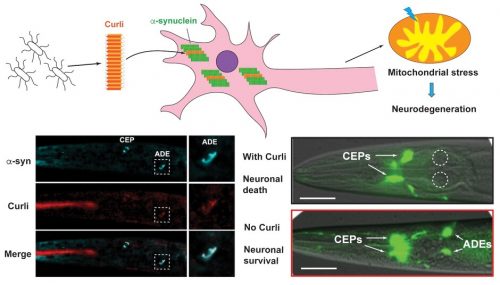 Growing evidence indicates that gut microbiota plays a critical role in regulating the progression of neurodegenerative diseases such as Parkinson’s disease (PD) and Alzheimer’s disease (AD), but the molecular mechanism underlying such microbe-host interaction is still unclear. A research team led by Dr Chaogu ZHENG from the School of Biological Sciences at The University of Hong Kong (HKU) recently discovered that bacteria-derived curli amyloid fibril promotes neurodegeneration in the host. This new study provides direct evidence to suggest that bacteria can secrete proteins that form an amyloid fibril, which enters the host neurons and promotes protein aggregation and neurodegeneration. Inhibiting the ability of the bacteria to secrete such proteins may be a preventative treatment for neurodegenerative diseases. These research findings were recently published in a leading multidisciplinary journal –  Proceedings of the National Academy of Sciences of the United States of America (PNAS).

The secret weapon of gut microbiota

Neurodegenerative diseases are caused by protein aggregation in the neurons. Studies in the last few years have suggested that gut bacteria may play an important role in the pathogenesis of neurodegenerative diseases. For example, antibiotic treatment that kill most of the bacteria in the gut can help ameliorate the pathophysiology of PD in mice. Despite the emerging idea of “microbiota-gut-brain” link, little is known about the bacterial molecules that modulate the progression of neurodegeneration.

To address this problem, the research team screened for bacterial E. coli genes whose deletion alleviates the PD symptoms in an animal model of PD. This animal is a microscopic nematode (worm) called Caenorhabditis elegans, used by scientists across the world as an important model organism for biological research. Because this animal fed on bacteria, the research team developed it into a powerful tool to analyse bacteria-host interaction.

From a genome-wide screen, Dr Zheng’s team identified 38 bacterial genes that can promote neurodegeneration in the animal host. Two of these genes code for proteins that form curli, one type of bacterial amyloid fibers. The researchers then showed that bacterial curli enters the neurons to cross-seed the human amyloid α-synuclein and promote its aggregation, which leads to proteotoxicity, mitochondrial dysfunction, and neuronal death. Genetically deleting curli genes or pharmacologically inhibiting curli formation significantly suppressed the PD symptoms and improved neuronal functions.

Furthermore, the research team found that curli also promoted neurodegeneration in animal models of Alzheimer’s disease, Amyotrophic lateral sclerosis, and Huntington’s disease, suggesting that the bacteria-secreted curli may have detrimental effects in a range of neurodegenerative disorders. Targeting curli production in the gut may represent a general therapeutic approach to prevent or slow down the progression of protein aggregation diseases.

“One of the interesting findings in this study is that a polyphenol called EGCG from green tea extracts can almost completely inhibit curli secretion in bacteria and has amazing effects in suppressing neurodegeneration. This is consistent with the observation that drinking green tea has beneficial effects in preventing neurodegenerative diseases,” said Dr Chenyin WANG, the first author of the paper. This research opens a new direction to develop preventative measures for neurodegenerative diseases by targeting bacterial curli production in the human gut.

Importantly, Dr Zheng, the supervisor of the research project, pointed out that, “this study established a new paradigm for understanding how bacterial components from the gut microbiome can influence neuronal health in animals.” In the future, Dr Zheng wants to move on to study other bacterial molecules identified from the screen and investigate how they affect host neurodegeneration. Dr Zheng envisions that a complete understanding of the bacteria-host interaction in the context of neurodegeneration can help identify novel therapeutic targets for neurodegenerative disorders.