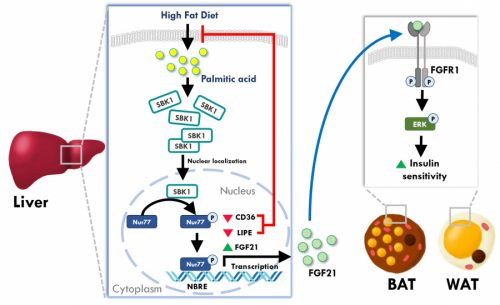 Non-alcoholic fatty liver disease (NAFLD), commonly known as fatty liver disease, is a prevalent disease frequently seen in obese people. Having high fat content in the liver is detrimental as it is strongly associated with severe health problems like diabetes, high blood pressure, and liver cancer. A research team led by Dr Chi Bun CHAN, Assistant Professor from the School of Biological Sciences, Faculty of Science, the University of Hong Kong (HKU), uncovers a new protective mechanism against this disorder. The research findings have recently been published in the world-leading scientific journal Hepatology.

The liver is the vital organ that orchestrates the overall glucose and fat metabolisms in the human body. Disruption of the fat metabolism in the liver will eventually result in hyperglycemia and hyperlipidemia, which are strong risk factors for developing diabetes, hyperlipidemia, and liver cancer. It is predicted that the number of NAFLD patient will increase from 80 million in 2015 to 100 million in 2030. While the outcomes of fat accumulation in the liver have been well established, it remains unclear if the liver possesses any defensive mechanism to work against the damage.

To answer this question, Dr Chan’s team examined the expression of genes in the liver of high fat diet-induced obese mouse and found a protein, SH3 domain binding kinase (SBK1), was exclusively elevated in the obese mouse liver. SBK1 is a protein kinase first discovered in 2001, but no follow-up study has been performed to determine its functions in mammals. Hence, the functions of this novel protein remain unknown.

Three keywords of the research:
SBK1 protein – serves to control lipid accumulation in the liver.
Nur77 – a well-established transcriptional factor in liver cells to control the expression of genes for lipid synthesis.
FGF21 – a metabolic hormone fibroblast growth factor 21 in the liver cell, which impairs the communication between the liver and other organs.

For the first time, Dr Chan’s team found that fatty acid accumulation is an inducer of SBK1 in the mouse liver. They also observed that the mice without the SBK1 gene in their liver, called ‘LSKO (liver-specific SBK1 knockout)’ mice, have higher lipid accumulation and fibrosis in this tissue. Moreover, the LSKO mice displayed uncontrolled hepatic glucose output and higher blood glucose level, and are less sensitive to insulin stimulation than their control cohort, which are strong indicators of diabetes development.

In addition to the animal studies, Dr Chan’s team also utilised cultured cell models to answer how SBK1 gene controlled the lipid metabolism in the liver. They found that SBK1 phosphorylated and enhanced the activity of Nur77, a well-established transcriptional factor, in liver cells to control fatty acid uptake and lipid synthesis. When the SBK1 protein activity was abolished in the liver cells, they took up more fatty acids and developed excessive lipid accumulation that interfered the insulin signaling. Surprisingly, another metabolic hormone in the liver cells, fibroblast growth factor 21 (FGF21), was also reduced when the SBK1 protein was abolished in the cultured liver cells and the LSKO mice. Since FGF21 is an important hormone from the liver to communicate with other peripheral organs like white adipose tissues, the reduced FGF21 hormone production in the LSKO liver thus impairs the communication between the liver and other organs, leading to the development of insulin resistance in other tissues.

To extend their findings to therapeutic application, the research team further tested if manipulating the SBK1 protein activity in the liver could rescue the damaging effect of obesity. Using adenovirus-mediated gene delivery, they transiently increased the amount of SBK1 protein in the mouse’s liver with fructose diet-induced fatty liver disease and found pathological symptoms like liver steatosis, inflammation, etc. hyperlipidemia, and hyperglycemia were all alleviated.

‘Our findings clearly show that SBK1 protein is an important regulator of the lipid metabolism that was neglected before,’ said Dr Chan. ‘We are very excited to see that increasing its activity effectively alleviates the health problems caused by fatty liver. But we still need more studies to fully depict its functional activity so that we can develop SBK1 activator as a new treatment agent for this common liver disease,’ Dr Chan further added.

This work was supported by the Hong Kong Research Grant Council, the Health and Medical Research Fund, and HKU Seed Fund for Basic Research.

The journal paper can be accessed from the following link:
https://aasldpubs.onlinelibrary.wiley.com/doi/abs/10.1002/hep.32501

About the research team
Led by Dr Chi Bun CHAN of the School of Biological Sciences, the project was conducted by a team of international scientists including: Dr Chi Wai LEE from School of Biomedical Sciences, Lee Ka Shing Faculty of Medicine, HKU; Dr Kenneth King Yip CHENG from the Department of Health Technology and Informatics, the Hong Kong Polytechnic University, Dr Leo Tsz On Lee of Faculty of Health Sciences, University of Macau, Professor Baowei JIAO of the Chinese Academy of Science Kunming Institute of Zoology and Dr Xiuying YANG of Institute of Materia Medica of Peking Union Medical College.