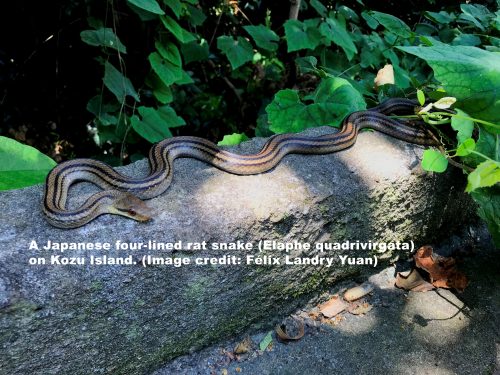 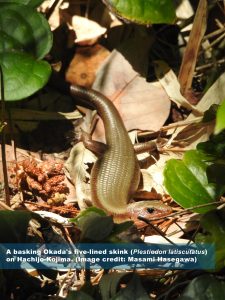 In a study spanning four decades, researchers from the University of Hong Kong’s Research Division for Ecology & Biodiversity (HKU) in the Faculty of Science, and Toho University’s Department of Biology (Toho), Japan, have discovered that predation by snakes is pushing lizards to be active at warmer body temperatures on islands where snakes are present, in comparison to islands free from snakes. Their work also detected significant climatic warming throughout the years and found lizard body temperatures to have also increased accordingly. The findings show that lizard thermal biology is highly dependent on predation pressures and that body temperatures are rising suggest that such ectothermic predator-prey relationships may be changing under climatic warming.

The research was conducted by PhD student Félix LANDRY YUAN (HKU) and PhD Candidate Shun ITO (Tohoku University’s Graduate School of Life Science) and led by Dr Timothy BONEBRAKE (HKU) and Professor Masami HASEGAWA (Toho). Initial observation and data collection was first started by Professor HASEGAWA in the early 1980’s, when he first noticed lizard behaviour differed on islands with and without snakes. Professor Hasegawa has since continually visited the islands annually to catch lizards and snakes for body temperature and morphological measurements. The researchers have accordingly detected that annual temperatures across the Izu Islands had increased by just over 1°C since Professor Hasegawa first started his observations, and that lizard body temperature had also increased with the same magnitude.

The Izu Islands demonstrate the value of island systems in teasing apart mechanisms through which predation directly influences behaviour, morphology and physiology of prey species. On the other hand, understanding the ways in which predation can affect prey responses to climate change requires long-term study. This international collaboration between HKU and Toho used these unique properties of this system (and Professor Hasegawa’s forethought and intensive data collections since the 80s) to show how predator-prey relationships may be vulnerable in a warming climate. “It is a great pleasure to reveal ecological and evolutionary responses among prey and predator interactions by this international research team. I’m very hopeful that the Izu islands become a key model island system to study ongoing evolution under global environmental change by attracting ambitious young Asian biologists to research this further.” Professor HASEGAWA said.