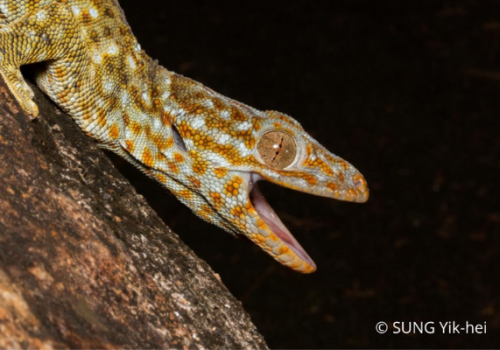 Tokay geckos are one of the most charismatic reptile species in Asia and the second largest gecko species in the world. They also are one of the most heavily traded reptiles, with millions exported every year from Southeast Asia, mostly as dried goods in Traditional Chinese Medicine (TCM), but also live for the pet trade. In Hong Kong, tokay geckos can be found in the wild, where they benefit from a protected status since 2021*, but also in pet shops and TCM markets. However, little is known about the impacts of the trade on local tokay populations nor the extent to which the TCM market impacts tokay geckos across its distribution.

New research from the Conservation Forensics Lab in the School of Biological Sciences at The University of Hong Kong (HKU) has been investigating the origins of tokay geckos in Hong Kong, both the wild ones and those sold in TCM shops. The findings were just published in the Proceedings of the Royal Society B: Biological Sciences. Dr Pauline DUFOUR, a then PhD student and now in a postdoctoral position at HKU, led the research advised by Dr Timothy BONEBRAKE (HKU), Dr Caroline DINGLE (HKU), and Yik-Hei SUNG (Lingnan University).

The project aimed at answering three main questions: (i) Where do TCM tokay geckos sold in Hong Kong originate? (ii) In which conditions were they raised? and (iii) Where do Hong Kong wild tokays originate?

To answer those questions, the research team used a combination of field and lab approaches. They first collected tissue samples from wild tokay geckos across Hong Kong, and from dried individuals sold in TCM shops. Using phylogenetic analysis, they compared their DNA sequences to sequences from all over Asia. They found that TCM tokays nearly all originated from Southeast Asia and not from Hong Kong wild populations. These results were confirmed via stable isotope analysis investigating their food source. However, the results revealed the poor traceability of tokays throughout the supply chain, with individuals sold as pairs originating from two different locations and a single label. This was further complemented by interviews of shopkeepers throughout Hong Kong.

With millions of tokay geckos being traded every year and only a very recent (2019) listing on CITES Annex II, this species is more vulnerable than its historic abundance might suggest. While farming has been proposed as a potential solution to overharvesting, recent reports have demonstrated the unlikeliness of operating large-scale farms, practically or sustainably.

“Events of poaching, at large or small scales, can have major implications on the long-term survival of small populations as they decrease genetic diversity and arbitrarily remove adaptive potential, which is extremely important for species facing multiple challenges. In similar ways, events of release can also trigger short- and long-term perturbations on the genetic diversity at the local and global scale, which is why knowledge of population genetics is crucially needed for evaluating the status of this species, and the appropriate conservation measures throughout its range,” said Dr Pauline DUFOUR, the first author of the study.

Dr Yik-Hei SUNG, an Assistant Professor from Lingnan University, herpetologist, and co-author on the paper further stated that “this study highlights the need for more stringent control of mercy/abandoned pet release”. Indeed, the pet trade is the leading cause of the introduction of exotic reptiles in the world.