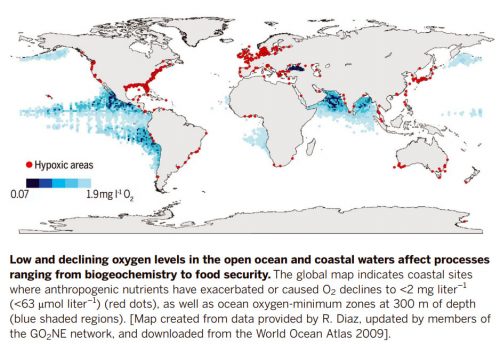 Oxygen concentrations in both the open ocean and coastal waters have been declining since at least the middle of the 20th century. This oxygen loss, or deoxygenation, is one of the most important changes occurring in an ocean increasingly modified by human activities that have raised temperatures, CO2 levels, and nutrient inputs and have altered the abundances and distributions of marine species. Oxygen is fundamental to biological and biogeochemical processes in the ocean. Its decline can cause major changes in ocean productivity, biodiversity, and biogeochemical cycles. Analyses of direct measurements at sites around the world indicate that oxygen-minimum zones in the open ocean have expanded by several million square kilometers and that hundreds of coastal sites now have oxygen concentrations low enough to limit the distribution and abundance of animal populations and alter the cycling of important nutrients.